As Halloween fast approaches is this also a spooky time for stocks? Without question volatility has picked back up which to me is no surprise at all. Factor in all of the headlines out of Europe, earnings reporting season here at home and last but not least, the daily Hillary Clinton and Donald Trump show. It’s no wonder stocks are bouncing around all over the place. For the week, the Dow Jones Industrial Average (chart) closed lower by one half of one percent, the Nasdaq (chart) closed off by 1.5%, the S&P 500 (chart) -1.0% and the small-cap Russell 2000 (chart) lead the pack and finished the week lower by 2%. With all of the headlines and headwinds for that matter, I still remain quite impressed by the resiliency of stocks despite facing a multitude of uncertainties.

Both Paula and I wish everyone a very safe and Happy Halloween and good luck to all. 🙂

Despite the uncertain times we find ourselves in vis-à-vis the upcoming presidential election, the Deutsche Bank balance sheet and liquidity concerns and the upcoming third quarter reporting season, stocks continue to defy the odds and remain within striking distance of all-time highs. The Dow Jones Industrial Average (chart) closed the third quarter at 18308, the tech-focused Nasdaq (see chart below) closed at 5312, the broad based S&P 500 (chart) finished the quarter at 2168 and the small-cap Russell 2000 (chart) closed at 1251.

I am truly amazed how strong the markets have been all things considered. We did see volatility spike in September which was no surprise. However, what was surprising is how short lived it was especially with how much concern and risk there is out of Europe and in particular Deutsche Bank. A couple of weeks ago the U.S. Department of Justice announced they were seeking a $14 billion dollar fine to settle Deutsche Bank’s mortgage lending activities during the 2008 housing crisis. Shares of Deutsche Bank stock plummeted on the news and raised concerns about the solvency of the bank. Stocks did react to the news but have seemingly shrugged off this potential risk to the markets. Furthermore, stocks so far have also shrugged off the uncertainty due to the upcoming presidential election. Monday’s presidential debate sparked controversy as to who won it, but it is clear that the markets saw that Hillary Clinton won the first round.

As we now enter the month of October, without question the headlines and chatter will only increase as we get closer to election day which is November 8th. I am expecting volatility to not only increase but to last longer than usual due to the amount of news flow that is forthcoming which includes the launch third quarter earnings reporting season. What I do in this type of market environment is tune out the noise and stay focused on the fundamentals and technicals of select stocks and indexes. I seek out and identify market dislocations including overbought and oversold conditions. My assumption is that as we get in the thick of third quarter earnings reporting season, overbought and for that matter oversold opportunities will present themselves. Good luck to all 🙂 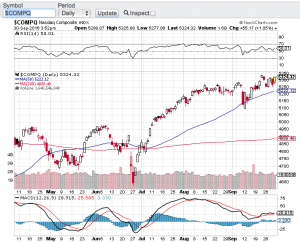