Caught off guard! I think this phrase wraps it up. After Donald Trump won the presidential election both voters and markets were caught off guard. The polls all but had Hillary as a shoe in for the oval office. Instead the exact opposite occurred not only with the election but how wrong the markets had it if Donald Trump pulled it off. Not only did the markets not crater, (although last Tuesday evening when the voting results were coming in the futures were tanking) stocks are back to setting records. Since the election, the Dow Jones Industrial Average (chart) hit an all-time high of 18,934, the S&P 500 (chart) is within striking distance of its all-time high, the small-cap Russell 2000 (chart) also hit an all-time high, however, the tech focused Nasdaq (chart) is lagging a bit due to the uncertainty of the new Trump administration policies on trade and how this could affect the technology space.

It has been quite a while since the markets have responded in such a bullish manner. Today marks the 7 straight day of gains for the Dow Jones Industrial Average (chart) led by industrials and banks. The banking index has exploded due to the hope that the Trump administration will relax or reverse the Dodd-Frank act which places overbearing regulations on the financial industry as a whole. Check out one of the most widely held bank exchange traded funds Symbol: XLF (chart). This ETF has moved up over 10% in the past week alone, simply unheard of. Other benefactors to the Trump presidency is anything and everything in infrastructure and materials. Trump pledges to spend over $1 trillion dollars rebuilding America’s infrastructure to include highways, roads, bridges, airports etc. It’s no wonder the markets are setting records once again.

Now what? Without question Trump winning the election is seemingly good the for the economy and so far for the stock market. However, as with any rally or sell-off for that matter, “reversion to the mean” typically occurs. I would be very careful chasing this rally or deploying any new capital. My preference is to wait until the inevitable pullbacks occur and look at the aforementioned sectors to consider any new positions. Of course it is always prudent to consult with a certified financial planner(s) before making any investment decisions. Good luck to all 🙂

Over the past week the CBOE Market Volatility Index aka the VIX (see chart below) has risen over 35%. Not too surprising considering the upcoming elections and the daily rhetoric that has been hitting the wires. What is surprising to me is that even though volatility has spiked recently, the markets have not really dropped. Isn’t how this is supposed to work? Increase in vol equals lower stock prices? The Dow Jones Industrial Average (chart), the S&P 500 (chart) and the Nasdaq (chart) all remain within striking distance of all-time highs and so far these key indices do not seem to be too bothered by the daily political headlines. Even Friday’s surprising if not shocking news that F.B.I. director James Comey has re-opened the Hillary Clinton email case could not rattle the markets. Although this particular headline did send stocks sharply lower in the late afternoon trading on Friday only to find support and close off of the lows.

I will say this; I am even more surprised that yesterday we did not see a sell-off in stocks after everyone had time to digest the news over the weekend. Stock market pundits continue to claim that the markets have priced in a Clinton victory and that her taking the White House in general will be bullish for stocks. I tend to agree with this however; my concern is will this be a “sell the news” event? I will also be paying closer attention to the polls this week to see if the Trump campaign closes in on the Clinton lead. This too can be a market moving dynamic. So as the VIX continues to lift and as we get closer to November 8th, I will error on the side of caution and lighten up any long positions and wait to see how this election plays out. Let’s also see how the markets react and respond to the election results and then come up with a game plan into year-end. Good luck to all 🙂 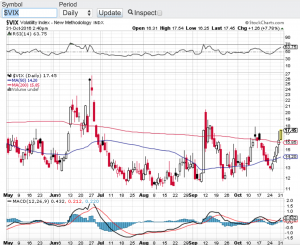