Stocks continue to set records and now on a daily basis! As I am writing this blog the Dow Jones Industrial Average (chart) is now trading north of 20440, the S&P 500 (chart) is trading well above 2300, the Nasdaq (chart) is trading above 5750 and the small-cap Russell 2000 (chart) set an all time high yesterday at 1398! I continue to be amazed on how resilient the markets have been and continue to be. Earlier this month it appeared that the Trump rally stalled out and it was becoming a wait and see environment. Well now the Trump rally has seemingly reignited. Trump last week announced he has major news forthcoming on his tax plan and that was apparently the cue for the markets to rally yet again. However, one has to ask how many more tweets, news conferences or headlines can take the markets higher? Without question the above key indices are becoming overbought and especially pertaining to the relative strength index also know as the RSI. Let’s take a look.

Currently the Dow Jones Industrial Average’s RSI (chart) is trading at a 73, the S&P 500 (chart) RSI is also currently at 73, the Nasdaq (chart) is even higher at 77. The only laggard pertaining to the relative strength index and being in an “overbought” condition is small-cap Russell 2000 (chart) in which its RSI is currently at the 60 value level. Remember the relative strength index is a widely utilized technical indicator that certain institutional traders include in their models along with a variety of algorithm trading platforms. The RSI is a momentum indicator that tracks the size of gains and losses over a given period of time with the 70 value level and above as overbought and the 30 value level and below as oversold. One of the concerns certain market technicians have is that these all time highs and overbought conditions have been occurring on relatively light volume. Without trying to call a top here, I suspect that the aforementioned indices and some of the overbought stocks within these indexes are due for a pullback.

There has been plenty of chatter over the past month or so as to whether or not the Dow Jones Industrial Average (chart) would surpass the 20,000 mark and what that would mean for the markets going forward. Well lo and behold, it did it! For the first time in its history, the Dow Jones Industrial Average (chart) breached the 20,000 milestone mark last week thanks in part to earnings reporting season. The Nasdaq (chart) also continues to set record highs although this week this particular index has recently been challenged by Donald Trump’s commitment to altering the H-1B visa rules which in turn could effect the tech industry in a meaningful way. The S&P 500 (chart) also remains near its all-time highs while the small-cap Russell 2000 (chart) is hovering around its 50-day moving average.

While earnings reporting season remains a key focus for investors, one cannot ignore the constant daily flow of news out of Washington D.C. President Donald Trump like no other has signed double digit executive orders in his first week of office alone fulfilling part of his campaign pledges. These executive orders range from loosening regulations in a variety of industries, to border security, to withdrawing the United States from the Trans-Pacific Partnership Negotiations agreement and to the construction of the Keystone XL pipeline, just to name a few. Without question Donald Trump means business and is acting swiftly about it. We know how the American public feels about this and most recently how corporate America is beginning to speak out, and it’s a mixed bag to say the least.

The question now is how will the markets ultimately react to the new norm, the protectionism posture of the new administration and the swift policy changes that are occurring? Well for the first time in a while market volatility (see chart below) has spiked as investors and traders alike try to digest the ultimate outcomes of such dramatic changes. In my humble opinion, vol is just getting started. Good luck to all 🙂 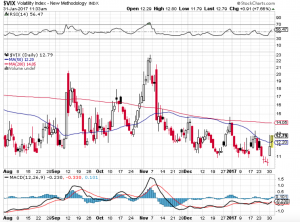