To no surprise, the Federal Reserve raised interest rates 1/4 point today citing stronger economic growth and a pick-up in inflation. A stronger job market also played a role in the decision of the Fed. What wasn’t quite expected was the language of an additional anticipated rate hike from the projected two hikes in 2017 to now three. This might of caused the slight sell-off yesterday in the markets with the Dow Jones Industrial Average (chart) falling 118.68 points, the S&P 500 (chart) was lower 18.44 points, the Nasdaq (chart) fell 27.15 points and the small-cap Russell 2000 (chart) retraced by 17.51 points.

With all things considered, this pullback was long overdue. In fact, I am surprised that the markets held up like they did yesterday. Especially considering the rip roaring rally most equities have enjoyed since the presidential election. Markets have been on fire with the Dow Jones Industrials (chart) gaining almost 1,600 points, the S&P 500 (chart) ripping 125 points, the Nasdaq (chart) catapulting about 300 points and the small-cap Russell 2000 (chart) up a staggering 170 points. What a breathtaking rally in such a short period of time.

So what can we expect between now and year end? Let’s think about this for a minute. If you are an institutional investor, fund manager, hedge fund or the like would you be taking profits into year end? Or would you wait until we get into the new year knowing that capital gains taxes and corporate taxes are coming down? I think it is fair to say the latter would make the most sense. Add into the mix the rotation that continues out of the bond market and into equities in which certain pundits believe we are in the fourth or fifth inning of that rotation, one has to ascertain that this bull market has more room to run.

Whatever the case I think pullbacks will be bought as momentum continues into year-end. Paula and I wish everyone the happiest and healthiest holiday season 🙂

For the first time since 2008 the Organization of the Petroleum Exporting Countries (OPEC) agreed to cut output sending oil prices and oil stocks soaring. Oil (see chart below) had one of its best days in years soaring over 10% which helped propel the Dow Jones Industrial Average (chart) and the S&P 500 (chart) to set yet another record high yesterday before a late day sell-off. Nonetheless, stocks have been on fire since Donald Trump won the election. Seemingly every sector other than the gold sector is overbought. All you have to do is look at the financial sector Symbol: XLF (chart), the materials sector Symbol: XLB (chart), the industrials sector Symbol: XLI (chart) and the energy sector Symbol: XLE (chart) to see how overbought this market is. That said, stocks and or indexes can remain overbought or oversold for that matter for extended periods of time. Add into the mix Trump’s pledge to spend over $1 trillion on infrastructure here in the U.S. and the pledge to cut corporate and capital gains taxes and why would anyone think this rally could not continue?

It is easy to get caught up in the current euphoria of this breathtaking rally in the stock market and the promises of the incoming administration. However, let’s not forget what has been promised has to actually occur and if there is any back peddling by the new administration, the markets could react just as aggressively to the downside as they have to the upside. I am not suggesting that this will happen but we have all seen politicians make promises before they are elected only to change their tune after they take their respective seats. Which is why I do my best to tune out the noise and focus on overbought and oversold conditions. And this is where we find ourselves today. A very overbought market that I would expect will revert to the mean at some point in time. 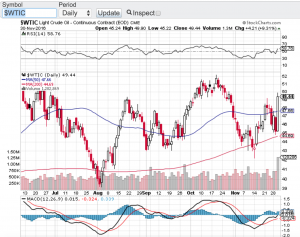