Big tech steals the show with blowout earnings results. Apple (NasdaqGS: AAPL), Amazon (NasdaqGS: AMZN) and Facebook (NasdaqGS: FB) all took the street by surprise with their upside earnings reports. For Apple, in addition to their blowout earnings, the company announced a 4-1stock split. This was more than enough for Apple to close up over 10% yesterday at an all time high of $425.04. Apple’s earnings came in over $2.00 per share on revenues just shy of $60 billion. Stunning numbers considering the backdrop that our country is currently in. When I look at what Amazon did, I am equally if not more impressed especially with how they grew their revenues. It’s hard to believe a company of this size grew their revenues 40% to almost $90 billion on the quarter. Without question Amazon has benefited more than any other company due to the pandemic. Consumers have flocked to online shopping more now than ever. Last but not least, let’s look at what Facebook did. Despite experiencing ad boycotts by some of the biggest brands in the world, Facebook managed to grow ad revenues by over 10% and grew earnings by almost 100%. I don’t think anyone expected these type of quarterly results from this group with all things considered.

Let’s take a gander at the major averages and how they are looking from a technical standpoint. The Dow Jones Industrial Average (see chart here) closed the week at 26428.32. When I look at the chart of the Dow, this index is not overbought according to the (RSI) and the Dow closed right around its 20-day and 200-day moving averages. The S&P 500 (see chart here) closed at 3271.12 and this index bounced off of its 20-day moving average with perfection. The Nasdaq Composite (see chart here) has been the big winner so far this year and technically speaking this index could potentially keep running. Heck, i’d be ok if it paused and consolidated a bit because of the run its been on. The other index that I keep an eye on is the small-cap Russell 2000 (see chart below). Speaking of consolidation, that is what appears to be happening with the Russell 2000. This index has been trading sideways for the past week or so and is trading consistently above its 20 and 200-day moving averages during this consolidation period. So all in all the aforementioned indexes appear to be on solid ground from a technical analysis standpoint.

In closing, despite the current shape of the market, the month of August historically tends to be a volatile month. Couple this with the upcoming Presidential election and we could be in for a wild ride between now and election day. 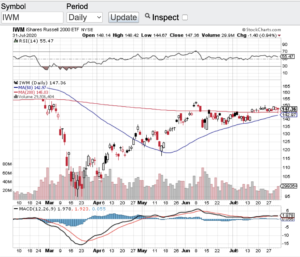