Despite this morning’s relief rally, stocks and indexes are either in an undeniable market correction or in an actual bear market. Healthy corrections are 10% or so declines, bear markets are defined by a 20% or more of a decline. This is where the small-cap Russell 2000 (click here for chart) finds itself and that is in a bear market. The Dow Jones Industrial Average (chart) is not quite in bear market mode nor is the Nasdaq Composite (chart) or the S&P 500 (chart). However, these indexes have lost over 6% of their value in December alone. Not since the great depression has the markets been hit this hard in the month of December. Furthermore, market sentiment has not hit this low since the 2008 crisis either.

So what is going on? The default answer to this question is the Federal Reserve and rising interest rates. The Fed actually meets tomorrow to decide on whether or not to raise by a quarter point. I think what’s even more important than whether or not they hike rates, it’s how dovish or hawkish they are in their testimony. I have to believe with how sharp and how fast stocks have corrected they may lean towards the more dovish spirit with a wait and see approach before raising rates again. The other default answer as to why stocks have been beaten down is the confusing messages that constantly flow out of Washington, especially as it pertains to the China trade war. The markets hate to be confused by policy makers especially our President and instead of holding on, clearly investors and traders alike have been dumping stocks for weeks now. If the Fed communicates their intentions clearly and if Washington is capable of doing the same, this could be just a market correction. If not, then I think we could see all of the aforementioned indexes fall into bear market territory. Good luck to all:-)

December is historically a strong month for the stock market. Many factors play into the last month of the year being a positive one including holiday bonuses, the general overall feeling of optimism and typically lighter volumes due to the holiday season. How we finish out this year will largely hinge on the results of this weekend’s G20 summit. Early indications are that the trade talks and other collaborative measures are going well. As the major averages enter into the last month of the year, The Dow Jones Industrial Average (click here for chart) finds itself at 25,538, the S&P 500 (chart) closed out the month of November at the 2,760 level, the Nasdaq Composite (chart) finished at 7,330 and the small-cap Russell 2000 (chart) finished November at 1,533. On the year, the major averages are barely in the green with the small-cap Russell 2000 actually a tad in the red.

Stocks this past week did get a boost from Federal Reserve Chairman Jerome Powell when Chairman Powell spoke at the Economic Club of New York. Chairman Powell stated that the Fed’s benchmark interest rate was now “just below” the neutral level. This sent the Dow Jones Industrial Average (see chart below) soaring over 600 points on Wednesday. Chairman Powell’s comments are being viewed by the street that the Federal Reserve just might be done raising interest rates for the foreseeable future. Now if we can get some concrete positive news and developments out of the G20 summit which is being held in Buenos Aires, then indeed we could be setting up for a year-end rally. 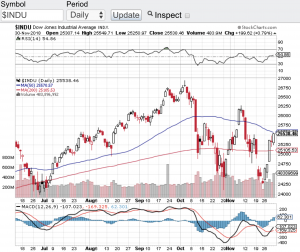