After years of essentially low to no volatility, traders finally get what they have been wishing for and that is a tradable market! In 2017 the markets witnessed the longest stretch of low vol in recent memory. In fact the VIX (see chart below) which is the ticker symbol for the Chicago Board Options Exchange volatility index traded in the 10 zone for most of 2017. The 10 level on the VIX (chart) is beyond abnormally low especially lasting for the better part of a year. Fast forward to today and the VIX is hovering around 20 after spiking to over 50 over the past two weeks. We haven’t seen the VIX (chart) at the 50 level in years. Call it long overdue, call it the market needed to correct, call it higher interest rates, call it what you want but finally we seemingly have more of a normal market environment. Not to say it wasn’t gut wrenching watching 1000 point Dow Jones Industrial Average (chart) intra-day swings over the past couple of weeks compared to the slow melt-up investors have enjoyed for years. Traders on the other hand have underperformed the markets during the melt-up because there simply was not enough or no volatility to be able to trade.

Stocks have indeed bounced sharply from the early February market correction. The Dow Jones Industrial Average (chart) closed the day up 307 points, the tech focused Nasdaq Composite (chart) closed up on the day 113 points, the S&P 500 (chart) closed up 32.5 points and the small-cap Russell 2000 (chart) finished the trading session up 15 points. Going forward I am certainly going to respect the technical make up of the aforementioned indexes and select stocks. Moving averages such as the 20-day, 50-day and 200-day tend to provide reliable support and resistance marks and now that we are out of the no vol environment, these moving averages tend to be more accurate and can be used to determined entries and exits in positions you hold and or trade. As I write this blog the key indexes have now rebounded to their 50-day moving averages so we will see if this technical indicator will act as resistance or if the markets can hold, breakthrough and proceed higher. Of course there is much more to consider when entering or exiting any position or strategy but when volatility comes back into the markets, most professional traders key in on the moving averages. Good luck to all 🙂 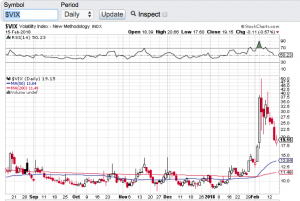 Earnings reporting season is now in full swing and so far the numbers are not too shabby. A couple of earnings standouts so far are Netflix (NasdaqGS: NFLX) and Boeing (NYSE: BA). Netflix saw subscriber and revenue growth both exceed analyst’s expectations and their stock has skyrocketed since their earnings release last week. Boeing which reported before the bell yesterday also knocked the cover off the ball as the company nearly doubled its net income from the prior period a year ago. A company doubling its net income may not sound like a lot, but when you go from $1.63B in net income to $3.13B that is clearly moving the needle in a fascinating way. Boeing shareholders were also rewarded yesterday as the stock traded north of $350.00 per share hitting all-time highs. I am just highlighting a couple of standouts so far with hundreds of companies set to report over the coming days and throughout the next few weeks.

I will say this, earlier in the week and for the first time in almost 2 years the market did feel vulnerable and the sell-off felt a bit different than recent pullbacks. Pundits are suggesting that interest rates may be playing a role in the volatility for the first time in years. I have been tracking the yield on the U.S. 10 year Treasury Note (Symbol: TNX) and for the first time in a long time the yield exceeded 2.7%. A break above 3% for an extended period of time could cause volatility to continue in stocks and may be the very first catalyst to put the brakes on this almost decade long bull run. Let’s see how the rest of earnings reporting season plays out and how interest rates fare in February before we can draw any type of conclusion. Good luck to all 🙂