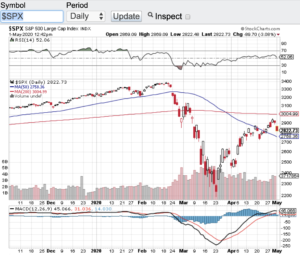 Stocks flew out of the gate yesterday thanks in part to a stronger than expected ISM manufacturing report. After the report was released, the Dow Jones Industrial Average (chart) was up over 150 points, then pared its gains closing the day up only 70. This morning stocks are mainly lower trading in a narrow range. So now that we are in October and in the final quarter of the trading year, will volatility finally kick in? After two months of tepid volatility and rare August and September market gains, we may just be in store for what most market pundits have been calling for all summer long.

Once again all eyes will be on this Friday’s jobs report to see if there is any sign of meaningful hiring in the private sector. I am not sure how the market will react if hiring remains weak because this might just spur the Federal Reserve to expedite its highly touted stimulus programs. Should that be the case, once again equities most likely will continue to benefit. The challenge I think most traders and investors have is with such a weak economy and corporate profits declining, how can one feel comfortable being long this market? The answer is seemingly a broken record, so long as we have the Fed as our backstop, volatility should create certain buying opportunities. Make sure to always consult a professional financial advisor before implementing any investment strategy. Good luck to all.

After such a torrid bull run this summer and with most major averages posting double digit gains, stocks finished lower this week, albeit modestly. For the week the Dow Jones Industrial Average (chart) closed down 0.10%, the Nasdaq (chart) -0.13%, the S&P 500 (chart) -0.13% and the Russell 2000 (chart) finished the week off 1.06%. This minor pullback is nothing compared to the rare and impressive September monthly gains with all of the above key indices advancing well over 3% so far this month.

As equities continue to remain strong after the Fed announced their latest stimulus package last week, I continue to monitor the underlying technicals of the markets and from what I see, the coast continues to remain clear. The one exception to how the big four is looking technically is that these key averages are at or near the 70 value level on the Relative Strength Index (RSI).  The RSI is a technical analysis indicator which measures gain and losses over a given period of time to identify whether or not stocks or indexes are currently oversold or in this case overbought.

That said, with central banks from around the world ready to flood the markets and economies with liquitidy if needed, I am now of the belief that stocks and certain commodities should remain overbought for the foreseeable future with the occasional pullbacks along the way. Good luck to all.

I know we keep talking about the Federal Reserve, but on Thursday Ben Bernanke announced the mother of all stimulus programs. The new stimulus package includes $4o billion a month to be injected into the economy  and a promise that it won’t stop until the unemployment picture dramatically turns around. Never before has a central bank made such a large extended commitment and then tie it to the jobs market.

Yes I triple confirmed the above statistics and there are no typos. Now the multi-million dollar question is  “is this bull market out of breath?” It’s only natural to think that this tape is overdone and is well overdue due for a healthy 5% or even 10% pullback? This may especially ring true with the most recent middle east tensions, the upcoming third quarter earnings reporting season and of course the U.S. presidential elections all on the horizon. That said, with the Federal Reserves unprecedented commitment to truly do whatever it takes to get this economy and now the unemployment picture completely turned around, I would think that any pullbacks would provide excellent entry points. Whatever you choose to do, make sure to always consult with a professional investment advisor.

Despite Thursday’s 250 point Dow drubbing, the key indices closed mixed on the week. The Dow Jones Industrial Average (chart) finished the week down 126.39 points, the Nasdaq (chart) finished up 19.62, the S&P 500 (chart) closed lower by 7.82 points and the Russell 2000 (chart) closed the week out gaining 3.84 points. Equities digested a lot of news this week including the Federal Reserve indicating they are ready to step in should the economy continue to falter. However, certain traders were disappointed the Fed did not provide another round of quantitative easing, hence a significant sell-off ensued on Thursday.

Personally, I think the markets need to quit relying so much on central bank stimulus and begin to focus on corporate earnings, which have been overall quite impressive. We are entering the last trading week of the second quarter which could prompt end of quarter window dressing. Window dressing is a strategy used by certain mutual funds and institutions near the end of the quarter to improve the appearance of their fund(s), this could bode well for the markets. Another potential positive for equities is Q2 earnings reporting season which begins in July. In my opinion, this is a key catalyst in whether or not stocks will stabilize over the summer and hopefully de-emphasize what the central banks may or may not do. Good luck to all.

After China announced a surprise rate cut last week, central bankers from Japan to Britain went on the record this week indicating they are ready to flood the system with liquidity if need be. This was enough to continue to fuel the key indices to one month highs. The Dow Jones Industrial Average (chart) closed the week up 1.70%, the Nasdaq (chart) +0.50%, the S&P 500 (chart) +1.30% and the Russell 2000 (chart) +0.28%.

I thought you were supposed to sell in May and go away? Apparently not this year. The concern I have here is that the markets are rallying on stimulus hopes and not fundamentals. In looking at the most recent economic data released this week, manufacturing activity is falling sharply, consumer sentiment is at its lowest level in months and unemployment is still a big threat.

Looking ahead to next week, obviously the outcome of the Greek elections will be the highlight for the markets on Monday. One thing is for sure, no matter the what the results are, central banks from around the world are ready to do what it takes to stabilize the financial markets and financial system. This stance taken by the global bankers should continue to bode well for not only equities, but in particular gold. Good luck to all.