8 in a row is the number of weeks that the Dow Jones Industrial Average (see chart below) and the Nasdaq Composite (see chart here) have notched gains. The S&P 500 (chart) and the small-cap Russell 2000 (chart) have also rallied sharply. So what’s going on? Earnings reporting season is well underway and so far it’s been somewhat of a mixed bag, although more bullish than bearish I would say. I think the obvious reason the rally is continuing is the fact the government did avoid another partial shut down this week and the chatter that has been coming out of China and the U.S. is that progress is being made towards an agreement on tariffs. That said, I am leery about an agreement coming together in the near future simply due to how both sides seemingly come together then fall back on whatever the tariff subject matter of the day. If there are any delays or signs of negotiations going sideways this could put a lid on the current rally and act as the catalyst for another pullback or correction. Some other chatter that has come up recently is corporate buybacks and how some politicians want to cap buybacks or outright regulate them. My friends if this happens, this too can be a catalyst for a pause and reversal of the 2019 market rally. Company buybacks have been a huge tailwind for this decade long bull market and if buybacks actually do become regulated, then things could look very different going forward especially in market sell-offs. We will see if this is just political chatter or something more.

Regardless of the pending outcome of the tariff negotiations or the balance of the Q4 earnings reporting season, I think we are due for a potential pullback of some sort after running for 8 straight weeks. The markets as a whole are a bit extended especially the small-cap Russell 2000 (chart)  which has entered overbought conditions with its RSI aka the Relative Strength Index (click here RSI) closing out the week at a value of 74. 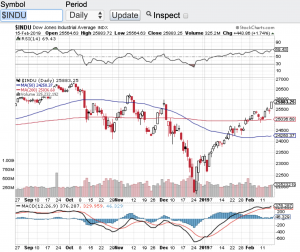 What should of been at least a 5-10% correction last week, the major averages barely flinched. This despite North Korea incessant threats of a nuclear attack against the U.S. and President Trump’s response that “fire and fury” will be unleashed by the U.S. in such an event. I am truly in disbelief that the markets did not take this geopolitical risk to correct in a more meaningful manner. In fact stocks yesterday had their best single day of the summer. Now we find ourselves yet again near all time highs. The Dow Jones Industrial Average (chart) closed just shy of 22,000, the S&P 500 (chart) is just under its all-time high of 2490, the Nasdaq (chart) closed at 6430 and the small-cap Russell 2000 (chart) closed Monday’s session at the 1395 level.

Talk about passive, machine driving algorithmic trading. One thing that really stands out to me is how the S&P 500 (chart), Nasdaq (chart) and the Russell 2000 (chart) all held their major moving average support lines. In particular the S&P and Nasdaq’s 50-day MA and take a look how powerful the Russell 2000’s 200-day moving average held and bounced (chart). It is clear that program trading models worked to perfection on this recent market pullback at least pertaining to key technical support levels.

So are we out of the woods pertaining to the risk trade? I am not so sure. But my goodness how can anyone have any kind of short thesis on these markets. Not even the heightened and continuing threat of a nuclear attack can rattle these markets more than 2 percent. Now that the rhetoric coming out of North Korea has abated for now, it could be business as usual as traders and investors get back to focusing on corporate earnings and fed policy. Whatever the case is I continue to be baffled by the strength of the U.S. stock market and without a doubt the old adage “don’t fight the tape” couldn’t be more true this year.

U.S. stocks and global markets fell sharply at the beginning of the week as the Russian ruble collapsed. This meltdown spread fears of contagion throughout the world while sending our markets down over 5% within a one week span. Then like clockwork, in a statement after the conclusion of the latest Federal Reserve meeting, the central bank reiterated that it is in no hurry to raise interest rates. This was enough to send the Dow Jones Industrial Average (chart) soaring 4.15% over the past two trading sessions, the Nasdaq (chart) gained an eye-popping 4.41%, the S&P 500 (chart) jumped 4.48% and the small-cap Russell 2000 (chart) over the past two trading sessions posted a staggering 4.63% gain. Yes folks, these two-day gains are not a typo.

Seemingly, time and time again, whenever there is a U.S. stock market correction in the making, the Fed steps in and calms the nerves of investors. The question I have is when will the musical chairs stop? What a tough climate to invest in especially when you really can’t gauge the fundamentals as the markets are heavily reliant on what the Federal Reserve does or does not do. When the markets were selling off, technicals broke down, moving averages were violated and the bears were beginning to growl. However, as we have witnessed over the past 5 years or so, it has been painful to be bearish on equities and any sell-off has been short lived. It may indeed take rising interest rates to slow down this bull market? Until then, it’s great to be a bull. That said, I am going to sidelines between now and year-end for a much needed break, and to see how things settle out.