Tesla follows SpaceX right into space! Tesla’s stock that is! (Nasdaq:TSLA). I am not sure if even Elon Musk thought that Tesla’s stock price would almost hit $1000 per share (see chart below) before its fundamentals warrant it. That’s right folks on February 4th Tesla hit an all-time high of $968.99 with an astounding parabolic move. This kind of stock behavior reminds me of the dot-com days where companies were trading in nose bleed territory without the fundamental backdrop to support the valuation. That said, without question the extremely large short position that has been put on Tesla has played a major role in the stock price spike. Tesla has long been one of the most shorted stocks on the Nasdaq which when stocks breakout of a trading range such as what happened to Tesla, and also having a significant short interest against it, then it’s the perfect set up for a major parabolic move.

With the stock still trading north of $800 per share, the company is not missing out on their next financing. To close the week out, Telsa took advantage of their recent stock price surge to price a $2 Billion secondary offering at $767 per share. I mean brilliant move for a company that continues to experience sporadic growth and still demands cash in order to hit their objectives. The potential problem I see is how can the Tesla a stock hold up at this crazy valuation? No question the short sellers covering their positions was a big part of this recent parabolic move. So the question now is who and what will drive the price higher? What’s more is who and what is going to support a $150 Billion dollar valuation? There are some analysts that are on their soapboxes with new buy recommendations and new target prices in the $1,000’s. So just maybe this will be enough to keep the stock up until the company catches up to its current valuation. 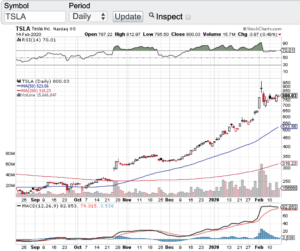